U.S. manufacturers are looking to Mexico for labor cost savings and Mexican states are competing for the foreign investment with unprecedented financial incentives.

“Mexican state and federal government agencies are offering inbound companies in certain industries incentives at levels we haven’t seen since the 1980s” said Mauricio Reyes an economic development executive at MexicoGov.org, a central information source for Mexico manufacturing startup and incentives information. “In the last six months we have received more requests for incentive estimates than we had in the previous three years. It is primarily U.S. and European manufacturers following their customers and accessing new markets.”

The reasoning behind financial enticements for foreign investment is simple: new manufacturing means jobs and the economic growth that comes with them.

Cities that are winning the lion’s share of new projects include Queretaro (Bombardier), Chihuahua (Textron/Cessna), Saltillo, Monterrey (Eurocopter), and Mexicali (Goodrich) with some new activity also in Zacatecas (Triumph Aerospace) and Tijuana.

“Until about 2000 Queretaro was an agricultural community serving Mexico City” said Monica Gonzalez, an industrial real estate broker at Queretaro Real Estate Brokers . “Now we have large aerospace, automotive, consumer products and other firms providing jobs and training for a thriving community. Much of this growth is the result of incentives and a low labor cost.”

When Canada’s Bombardier selected Queretaro for aircraft manufacture, reportedly in response to one of the largest government incentive packages in Mexico’s history, it set off a battle between Chihuahua, Queretaro, Mexicali, and Monterrey to win other aviation industry projects. Major companies including Goodrich, Eurocopter, Textron, and others divided evenly among these cities with their suppliers moving quickly to follow.

Foreign manufacturing investment is not limited to the aviation industry according to a representative of Monterrey Brokers, an industrial real estate firm that leases buildings in Monterrey and nearby Saltillo. “As the U.S. economy declined there have been many firms coming to manufacture in Mexico for a lower labor cost across almost every industry including automotive, furniture, industrial products, medical devices and others. Our clients tell us that government incentives like payroll tax waivers are definitely part of the decision process.”

A recent survey forecasts U.S. companies will invest in excess of $2.5 billion in Mexico manufacturing during 2010 according to an announcement by the American Chamber of Commerce. “Incentives are definitely a factor here” said MexicoGov.org’s Reyes. 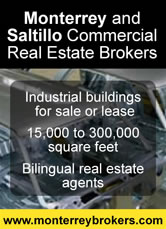 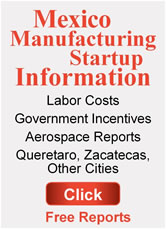